Together, we contribute to a better future

The Ecological Plebiscite ORGANIC LIFE TOP 50 List is designed to connect people, support eco-initiatives, strengthen ethical attitudes, support ecological social campaigns, the development of the Zero Waste trend, permaculture, biodynamics, as well as companies that want to make a positive change in the near future, and only need some support and sound. By joining under the banner of the Plebiscite, everyone becomes an accelerator of the development of all other ecological ideas in Poland, thus putting pressure on the rulers, on other media, on the management boards of non-ecological companies and on buyers in hypermarket chains.

In the meadows in Juchowo, representatives of various ecological environments, scientists, doctors and activists met. The ORGANIC LIFE TOP 50 Final Gala was preceded by the Ecomedicine Congress and the Ecological Networking Session. The program of the day, full of attractions, turned out to be extremely beneficial for the participants!

Great personalities who have acted with determination for decades, regardless of anything, expecting no subsidies or government support – made everyone feel very special at the very beginning of the day of the event. The uniqueness of this event also lies in going beyond the scope of ecology itself and in taking into account the issue of ethics and the development of human consciousness.

We had the opportunity to see many effective, scientifically supported practices, presented both by the guests who used them in organic farming, and by the management of Juchowo, who presented the principles and examples of biodynamic agriculture, discovering the largest farm in Europe covered by the Demeter label!

This extraordinary day began with the first Ecomedicine Congress in Poland, during which scientific and medical knowledge met organic food and showed many benefits of choosing organic food over conventional agriculture products. Participants had the opportunity to learn how to avoid or delay eye diseases for several decades, how to optimize the development of a child’s health and how to avoid the risk of autoimmune, allergic and cancerous diseases. And this is only a symbolic part of the 4-hour lectures.

After a short lunch break, the Foundation Board introduced the participants to the resources of the biodynamic farm in Juchowo. The farm covers an area of nearly 2,000 ha, but the guests saw the nearest buildings, including the place where the pride of the Juchowo Farm brand is created, i.e. high-quality Demeter milk, which is not only intended for direct drinking, as fresh milk, but also processed into the famous cheese and yoghurts. The guests found out that the milk from Juchowo is safe even for people allergic to milk. All Participants had the opportunity to taste different types of cheeses, as well as acquire their favorite flavor (including KUNDEL) and take it home with them.

As part of the Rural Project in Juchowo, various projects are developing, such as pedagogy and education, nature protection and research, professional activation and social integration of people with disabilities. A team of about 130 people is working for the Rural Project.

The trip around Juchowo lasted less than an hour, but it aroused the interest of guests so much that they are already planning their next visit here!

Ecological networking, as the next point of the program just after the meal, was to connect the leading activists and practitioners of the ecological industry in Poland and generate as many business and educational contacts as possible. This session was very popular! It was also attended by other guests present in Juchowo for other reasons, because, as they stated themselves – they had never had the opportunity to participate in this type of activity before. It took just a few conversations and 30 minutes of activity to produce several hundred new relationships in the professional field. The guests were surprised to find that during these 30 minutes they made more valuable contacts than sometimes during 2 days of fairs or festivals!

To provide participants with even better conditions for effective cooperation and exchange of experiences, the organizer envisaged an extension of networking in the form of several thematic sessions in three parallel conference rooms. Participants could engage in in-depth conversations and listen to the experiences of farmers, entrepreneurs and environmental activists. Guests could take part in all activities free of charge.

After the networking session, when the participants had already met, they were invited to the Agnihotra show. For the great majority, it was the first opportunity to experience such a practice, and at the same time it was an atmospheric introduction to the Final Gala. The show was conducted by:

Agnihotra is the process of purifying the atmosphere by specially prepared fire during sunrise and sunset, a practice derived from Ayurveda, which is the basis of Homa Therapy.

After this extraordinary overture, the Final Gala had a dimension of a timeless experience, as if all its participants had known each other for decades. The combination of people with the same values around one scene had an electrifying effect on all Participants, as you can see in the photos below. The event took place in the meadows of Juchowo, on the lake shore, surrounded by a forest and with the sounds of departing cranes.
The event turned out to be socially important, significant for the industry and is already in demand in the following years.

It is not known what the fate of the Gala will be, but we know that the Organic Life Top 50 List is already alive and will be expanded with another numbered items in the coming years. It will also be promoted in the media, in the medical and environmental circles. Foundation Stanisław Karłowski is already considering making a larger facility available to the organizers of the Gala so that a larger number of guests can be accommodated in a year’s time, but whether this goal will be achieved, it is not known yet, as the building is undergoing revitalization.

The long-term goal of the Plebiscite is to create a list of the best of the best in terms of activities in the field of ecology in various spheres of our life, both in agriculture, food production, cosmetics, cultivation support measures, in the sphere of activities aimed at increasing Poles’ awareness of the importance of ecology for our future, e.t.c.

Have a look at the photo galery: 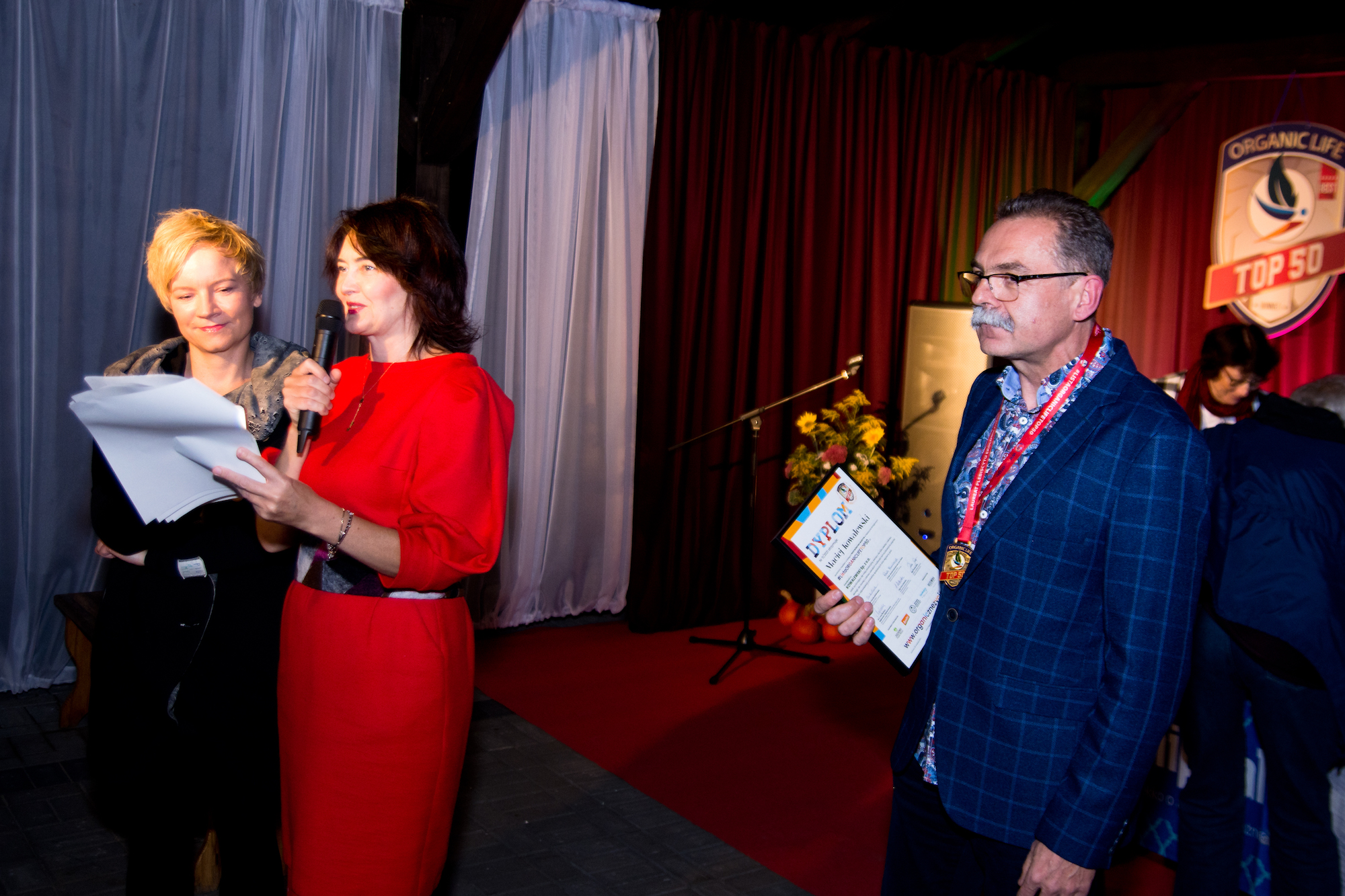 The winners of the Ecological Plebiscite medal The ORGANIC LIFE TOP 50 list receive a diploma with the number on the list as Winners of a given category. In addition, the winners have the opportunity to take advantage of an interview presenting the profile of the plebiscite hero (on this page), as well as the possibility of a 12-month exposure of their brand or project in the section: https://organic-life.tips/pl/brands. The materials must be delivered by October 31, 2021 at the latest.

People who awarded with a diploma of recognition received an opportunity to appear in the organizer’s media in the form of an interview on the environmental projects underway.

The Warsaw Chamber of Commerce has declared the possibility of a promotional interview for both groups of Winners.
Contact to WIG in our editorial office. Please, use this form: form.

Out of 122 nominees through the Jury’s deliberations, a list of 46 qualified Laureates and 10 distinguished persons was drawn up.

Here are the winners of the #ListaORGANICLIFETOP50 Ecological Plebiscite,
winners of the medal and numbered diploma, which translates into a place on the aforementioned list:

Category: PRODUCER OF GROATS AND FLOUR

Category: MANUFACTURER OF HERBS AND SPICES

43. Joanna Szczepaniak, author of the concept Kitchen for Health [więcej>>]

The jury did not appoint 4 categories this year, and some of the categories were changed at the will of the jury, in accordance with the rules of the Plebiscite.

All winners receive a diploma, a medal, have a right to an online interview about their activities and the possibility of a year of promotional support from the editorial of ORGANICZNEZYCIE.pl, as well as an interview on the online service of the Warsaw Chamber of Commerce. However, the distinguished receive a diploma of recognition and the possibility of an online interview at ORGANICZNEZYCIE.pl.

In addition, all the current Laureates and Distinguished received material prizes from the Fundacja im. Stanisław Karłowski and the GELTZ MEDIA publishing house. The diplomas were funded by the Demeter-Poland Association.

Here are the names of the people who selected the Jury from among the nominees and awarded 10 distinctions:

We would like to thank the Readers for the Nomination, as well as colleagues for the joint many years of effort put into creating the knowledge base.

The jury consisted of:

The organizer of the Final Gala and the Ecological Plebiscite #ListaORGANICLIFETOP50 is the GELTZ MEDIA publishing agency, the publisher of the HIPOALERGICZNI magazine and online service, owned by Żaneta Geltz – founder of the Happy Evolution Global Association.

The partners of the plebiscite are:

In harmony with nature and with respect for people, animals and the earth

Foundation Stanisław Karłowski implements the social Rural Project based on biodynamic agriculture. Biodynamic agriculture is the basis on which activities related to the protection of nature and the environment, scientific research, and broadly understood ecological education are based. People with disabilities are activated and initiatives related to social entrepreneurship are developed. 20 years ago, operations were started on sterile soil, with no access to qualified staff, far from large cities and outlets. The fertility of the soil is successively rebuilt through the use of manure, compost, biodynamic preparations, and appropriate crop rotation and agrotechnical treatments.

Breeding of dairy cows on the farm is carried out in terms of longevity. At the same time, measures are taken to care for the landscape and biodiversity by setting up mid-field ponds, mid-field plantings and creating roadside alleys. The Foundation shares its experience and the effects of its difficult, consistent work during organized training and biodynamic courses, in published articles and during numerous study visits. It is also mentioned during workshops for children, adolescents and adults, where you can see that children are the best ambassadors of our activity.

There is room for everyone in the Rural Project, a large part of the crew are residents of the surrounding villages and people with disabilities. The Foundation’s activities are carried out in harmony with nature and with respect for people, animals and the earth.

The fruit of all the activities of the foundation is biodynamic and organic food of the highest possible quality. The food is marked with the BIO and DEMETER certificates, and in the case of milk, it is probably the only farm in Poland that has the hay milk certificate. The development of processing of raw materials from the farm is organized in social economy entities with which the foundation cooperates on the basis of association. Thanks to the consistent promotion of healthy food, more and more people consciously reach for ecological and biodynamic products.

Ecological plebiscite The ORGANIC LIFE TOP 50 list supports, informs, strengthens growth, mobilizes for personal development, creates a homogeneous company of people and companies with a common goal. Organizations, potential patrons of events, as well as the media who want to promote together with the editors of Hipoalergiczni are invited. ways for a brighter, sustainable and conflict-free future resulting from the struggle for scarce, rapidly declining natural resources, such as water and fertile soil.

Ecological plebiscite The ORGANIC LIFE TOP 50 list is a specific overview of the development of ecology in all significant industries: agriculture, processing, construction, technology, tourism, education, health care and others.

Look at the photo relation of the Final Gala:
https://hipoalergiczni.pl/fotorelacja-z-gali-finalowej-organic-life-top-50-w-juchowie-zobacz-zwyciezcow/

Look at the photo relation of the Ecological Networking Session:
https://hipoalergiczni.pl/fotorelacja-z-ekologicznej-sesji-networkingowej-organic-life-w-juchowie/

We know names of the nominated

Finding your balance in life

12 months to a zero waste lifestyle